Rosario, images of a city to be discovered is a new book that aims to show pictures of the most emblematic places of Rosario City (Santa Fe Province, Argentina), details of its buildings, sightseeing and walks, and unknown corners.
It works as a tourist guide and provides useful information for visitors. It is a first contact for those who still haven’t been to the city. On the other hand, it may just be a mean to discover its places and reminded them. It is an invitation to walk through the city, to enjoy it and to remember it.
The book is a bilingual edition (Spanish-English), released in December 2013.
All pictures contained therein were especially shot for the production of the book itself during 2013, aiming to mirror the present view of the city. 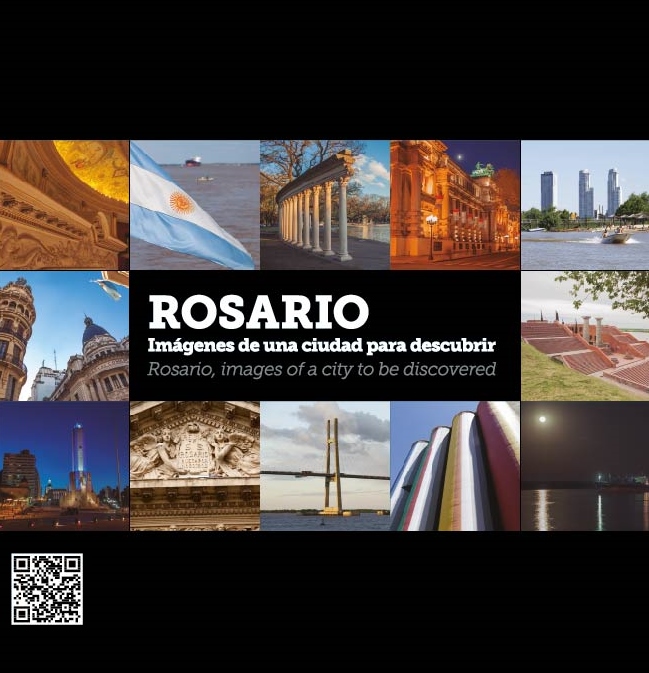 Rosario is a city of Santa Fe Province, in Argentina. It is the third most populated city in the country. It is placed on the right side of the Parana River, and its more than 12.5 miles (20 km) riverbank builds up a unique landscape for the town.

It is a young city in constant evolution. During the few last years it experimented very remarked changes which are especially noticeable in private building and in the allowing access to public areas on Parana riverbanks.

An increasing tourism trend became strong during the last decade. Rosario has more and more visitors each year who are especially attracted to sport matches; educational, artistic and cultural activities, fairs, conferences and meetings of varied kinds, among other interests.

The Third Spanish Language International Conference in 2004 was a milestone in its history. Ten years later, the Dakar Rally international race start is another key moment, with thousands of participants and tourists from all over the world.

Rosario City is well-known for its National Flag Memorial, the most emblematic spot in the city and a unique piece in the world.

The book Rosario, images of a city to be discovered comes out to portray the most emblematic places in the city and to show their present development. It tries to exhibit historical spots and new building erection, details of its buildings, sightseeing and walks and some unknown corners. It attempts to be a tourist guide suggesting paths and provides useful information for visitors.

Important dates and celebrations:
– January (nearly first week): “Caravan of desires” (a nautical caravan along the Parana River to welcome the New Year).
– June, 20th: Flag Day (national holiday).
– October 7th: Feast of the Virgin of the Rosary, City Day.
– November, mid: Feast of Nationalities.
– In Argentina, many national holidays are celebrated on Mondays, making a larger weekends which is called «long weekend». During this time, tourism in the city is greatly increased. In addition, a very busy time takes place during the winter holidays (two weeks in July).